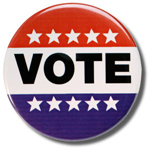 Calvin Coolidge, Thirtieth President of the United Statessaid, “If the people fail to vote, a government will be developed which is not their government… The whole system of American Government rests on the ballot box. Unless citizens perform their duties there, such a system of government is doomed to failure.” Of the 52 million voter-eligible Evangelical Christians in America, 10 million were not registered to vote for the 2006 Election, and over 20 million who were registered, did not vote. Quite simply, less than 40 percent of all eligible to vote Evangelical Christians in America… voted. Millions of evangelical Christians, out of apathy, ignorance, or indifference, choose not to vote in election after election. Our absence from the voting booth has contributed greatly to the moral, spiritual, economic, and political disintegration of America. Dwight D. Eisenhower, 34th President of theUnited Statessaid, “The future of this republic is in the hands of the American voter.” Franklin D. Roosevelt, 32nd President of theUnited Statessaid, “Let us never forget that government is ourselves and not an alien power over us. The ultimate rulers of our democracy are not a President and senators and congressman and government officials, but the voters of this country.” Too often, Christians are being misled about participation of their churches in the elective process. While pastors and church elders are prohibited from endorsing candidates or parties on behalf of their congregations because of the tax-exempt status of the church, the Internal Revenue Service has specifically stated that “activities intended to encourage people to participate in the election process, such as voter registration and get-out-the-vote drives, would not be prohibited political campaign activity if conducted in a nonpartisan manner.” “We Christians are commanded by Christ Himself to be ‘salt and light’ to the culture in which we live, and Voting is an important aspect of that duty,” writes David Crowe, the Founder and President of Restore America. Read more at: http://www.conservativecrusader.com/articles/restore-america-get-out-the-christian-vote  ]]>

Make a Difference This Constitution Week